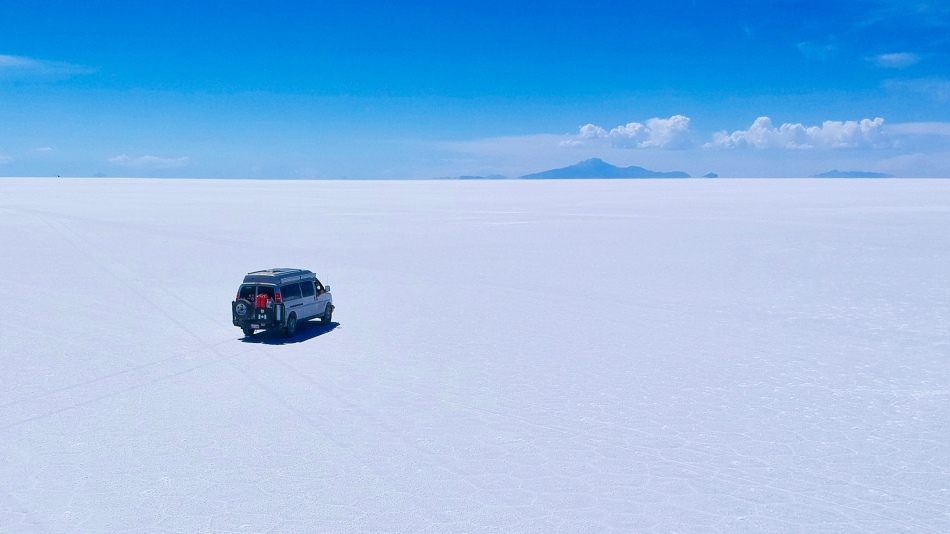 Crossing into Bolivia from Chile was a bit like stepping back in time. Everything was more or less the same, just a little… rougher. The roads are worse, there are no supermarkets, the gas stations are makeshift, and there are no real tourist facilities or campgrounds. We’re told the police corruption was worse too, but thankfully we did not experience any. The good news is that Bolivians are very friendly and you can still get most everything you need, you just need to work a little harder for it.

We had no problem at the border crossing. The Bolivian immigration officer barely looked up from his cell phone to stamp our passports and, after a short wait for our vehicle import permit at the Aduana office, some last-second directions from the border guard, we were rolling into country number four. We’d been warned that the road to Uyuni was brutal and we were prepared for the worst. We had filled our spare fuel containers and stocked a dozen litres of bottled water. The road however, although unpaved, turned out to be smoother than some of the paved Argentinian roads. Before we knew it, we were halfway to our destination and enjoying some of the most spectacular scenery we had seen in weeks.

It turns out we were lucky to stumble into Uyuni on a Sunday when the main street market was in full swing. We wandered around the stalls and stocked up on cheap, fresh food before returning to the outskirts of the city to camp at the famous “train cemetery.” Here we found our Swiss friends, Kurt and Monica, whom we’d been camping with days ago back in San Pedro de Atacama, Chile. They had taken a similar route to us only a day ahead, with one key difference; they didn’t ask for last-second directions from the border guard and had taken a different gravel road to Uyuni. Their road was worse, so much worse that they had broken a shock mount and vibrated their spare tire right off the front of their old VW van! You win some, you lose some. 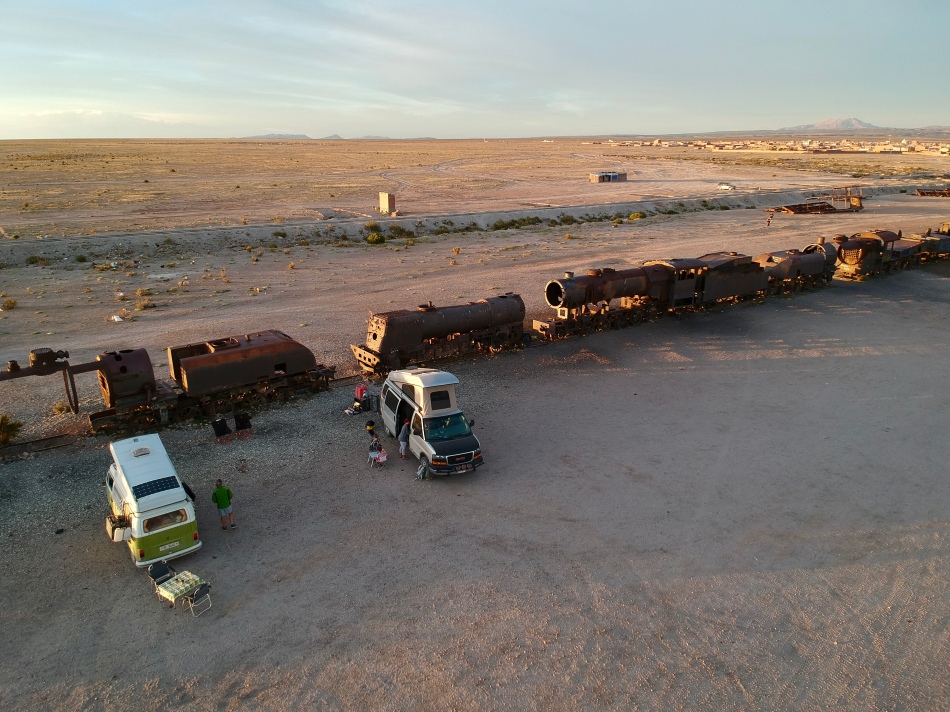 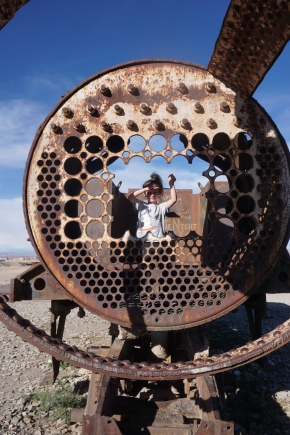 Our primary goal in visiting Bolivia was to see the great Uyuni Salt Flats (Salar de Uyuni). At over 11,000 sq. Km, this is the largest salt flats in the world. We had heard great stories about driving across it and we were hopeful that the beginning of the rainy season didn’t mean we were going to miss out. Thankfully, when we arrived at the the salar we found it to be mostly just slushy. We navigated around a few deep  holes at the entrance ramp and then set out onto the flats.

Our first task was to find the Dakar monument, which is a large sculpture erected by/for the Dakar Rally. This rally, which used to run from Paris to Dakar Senegal now operates in South America and often runs stages on the salar. We plugged in the GPS coordinates and navigated towards a little dot on the horizon. We took a few pictures with the Canadian flag and then set out again onto the vast plain of nothingness.

It was a strange sensation driving to nowhere. We just pointed El Condor in a North-ish direction and let go of the wheel. We had to keep the speed down below 40kph to minimize the amount of brine slush we were spraying all over the van, but otherwise we literally let go of the wheel and made jokes about not paying any attention whatsoever to where the van was going.

We had heard stories of people setting the cruise control and then climbing out the windows to ride on the hood, but we were not that ballsy. However, we did give both kids several turns driving the van, which they both enjoyed immensely. We also staged several of the obligatory perspective pictures that everyone must do when on the Salar.

Our plan was to camp somewhere in the salar but as the dusk approached we couldn’t help but notice a very large and angry looking cloud moving towards us from over the distant mountains. We decided that we would rather not be caught out in the middle of the flats if it were to rain heavily as this could strand us and our heavy 2WD van. It was the rainy season after all, this is to be expected. So we reluctantly packed up and headed back towards the edge of the salar just as the storm clouds crashed over us onto the flats. It turns out that it wasn’t a rainstorm but actually a massive sandstorm! Regardless, we were safer on the edge of the salar rather than out in the middle of nowhere.

After a thorough car wash, we continued for two days up the surprisingly good highway towards La Paz. Confusingly, this city is touted as the “highest altitude capital city in the world”, whereas our information told us that the official capital of Bolivia is Sucre. Regardless, it is a very large city and we decided several countries ago that we don’t enjoy driving in large cities. We did however, want to see La Paz and the famous El Alto market, supposedly one of the largest outdoor markets in the world. Our plan was to stick to the highway which would bring us very near the airport where we would “camp” in the secure overnight parking lot.

The parking lot was actually not the worst place we had camped on this trip, despite the car alarms that sounded every time a jet took off. The clean bathrooms, first-world restaurants, and wifi at the terminal building made it a very reasonable place to stay. Not to mention, we felt completely safe sleeping behind the barbed wire fence.

We grabbed a taxi (yet another perk to camping at an airport) and took it to find the El Alto market. It turned out this would not have been a difficult task on our own because the ENTIRE city becomes a market every Thursday and Sunday. Literally every street we turned down was jammed with tens of thousands of stalls selling absolutely everything you could imagine, and much more! Clothes and food? Of course. Knockoff Chinese toys? Got ‘em. Need a new engine or transmission for your car? No problem. How about some sketchy looking medical equipment? Or maybe a new suit and dress shoes? It was like walking through Bolivian Kijiji. Conveniently, La Paz has several gondolas that run over the city which allowed for a perfect vantage point to see the city and enormity of the market. 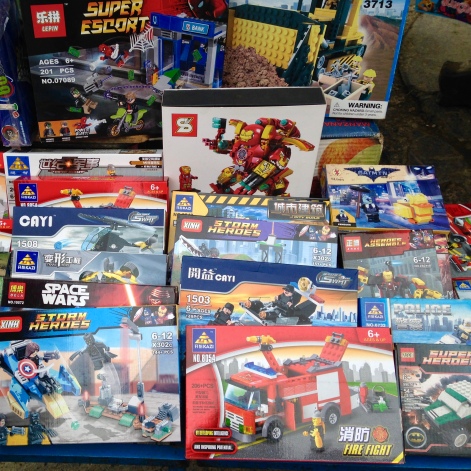 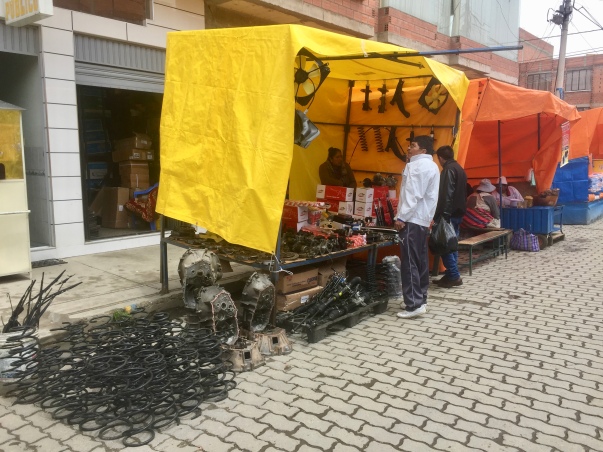 After an epic battle with the swarms of minibus taxis (collectivos) to get out of La Paz we began to make some headway worth towards Lake Titicaca. Our first task was to catch a “ferry” across the Straight of Tiquina. These are little more than patchwork barges with undersized outboard motors which somehow move everything from cars to full size buses and cargo trucks across the channel. 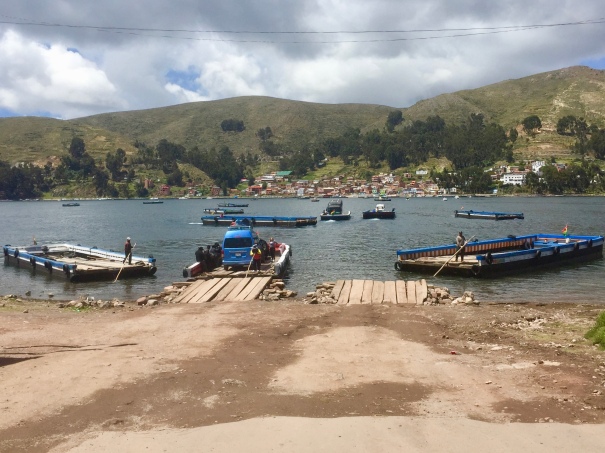 The picturesque town of Copacabana is nicely situated under the terraced hills on the shore of Lake Titicaca. It is undeniably scenic. We found it highly disappointing that the streets and lake shore were overrun with trash. However, the town redeemed itself with its ample supply of tasty street-treats. The bags of fresh popcorn were addicting and we enjoyed more than a couple helpings of Papa Rellena y Salteña (deep fried mash potatoes stuffed with veggies and beef). Rob even found a beer and ice cream float in the town plaza. 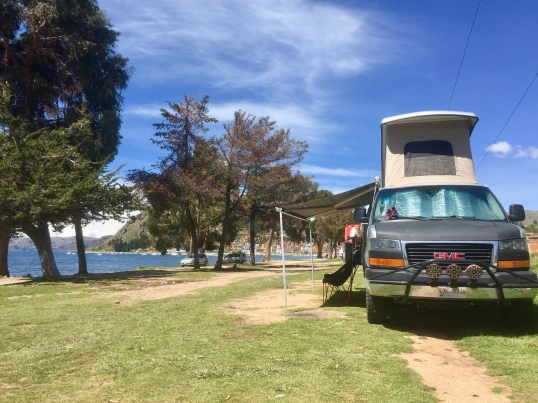 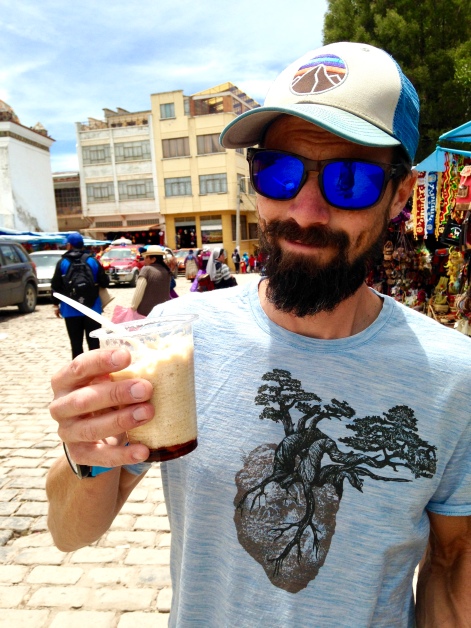 Despite our whirlwind one week itinerary, we felt ready enough to leave Bolivia. We figured we had experienced a reasonable highlight package, without over stressing ourselves or the kids. It is a beautiful county and the Bolivians are a friendly and hard working people, despite their hard-luck history. We have a feeling that they might be poised for a comeback.

To see more of our time in Bolivia, check out the links below.