We crossed the entirety of Argentina, from East to West, in a 5-day blur of YPF gas stations and farm fields. We had already visited the two major central centres, Rosario and Córdoba, on our previous visit to Argentina so we didn’t feel the need to pass through them again. Instead, we chose the shortest possible route from Uruguay to Mendoza. Because the heat of summer had arrived, MJ carefully researched our route to include as many campgrounds with swimming pools as possible. This turned out to be more than a nice perk for the kids, but rather a necessary survival tactic as the temperatures climbed over 40C on some days and never dropped below the mid 30s, even at night. Thankfully, Argentinians definitely enjoy a good swimming pool, and thus every little farming town seemed to have one attached to the local campground. 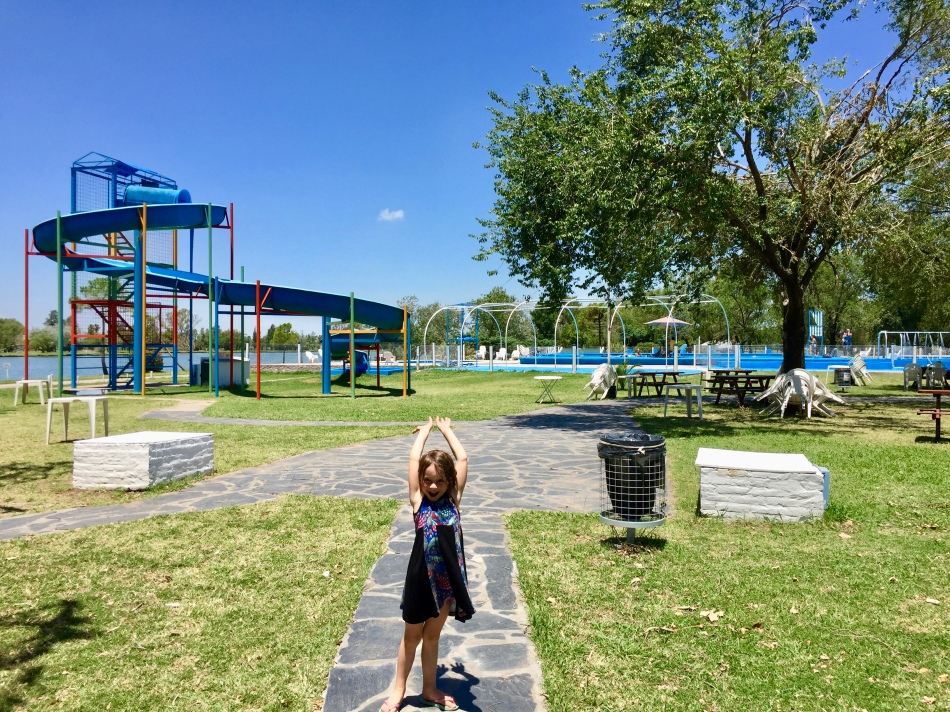 (Even in the little farming town of Colon, which had unfortunately been battered by a tornado only a few days before we arrived. Despite the shattered trees and toppled electrical poles, the pool was swarming with kids on summer break, all eager to try out their English skills on the strange Canadian family.)

By the time the Andes began to rise over the horizon once again, we were exhausted from the driving. The highways were crowded with aggressive summer traffic and cargo trucks dangerously leap-frogging each other. We arrived in Mendoza on the afternoon of New Years Eve, exhausted, and were nearly turned away by the campground because they were full. We gave the owner a very sad look and he agreed to take our money and let us park on the last piece of uneven ground at the very back of the property. We were content enough to not have to search for a new campground, and then suddenly very excited to find a motorhome with Quebec plates and a bright red maple leaf sticker parked a few sites away! The owners, Yanic and Stephanie (Les Trotteux d’Amerique) were a pleasure, and Liam and Averie became instant friend with their two children Simon and Flavie, despite the French/English language barrier. Additionally, in the site next to them we met Martin and Caroline (Gufligers), a Swiss couple with their impressive hand-built Land Rover overland rig. 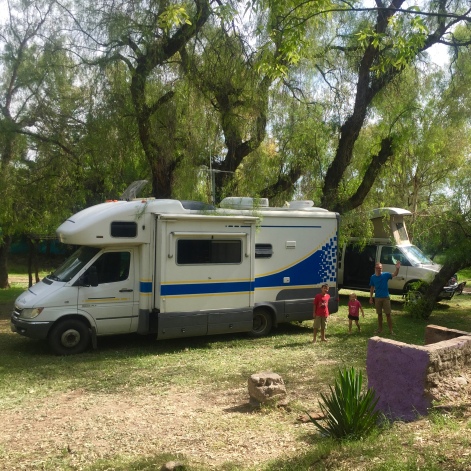 What we thought would be a simple New Years Eve in a campground, became an amazing impromptu party with our new Canadian and Swiss friends. We enjoyed a very impressive potluck feast and stayed up to swap stories and welcome in the new year with singing and cheering. Thankfully, the following day was a designated rest-day which we used to get caught up on sleep, laundry, and maintenance.

We said some (temporary) goodbyes to our new friends and scattered from the campground knowing we had a good chance of meeting up again down the highway. Of course, Mendoza is synonymous with wine, and we couldn’t leave without sampling some local Malbec. We stopped at the Bodega Lopez winery near the outskirts of the city, and after a (Spanish language) tour and tasting we found the highway and began our climb up the east side of the Andes with a couple of fresh bottles of vino in the pantry. 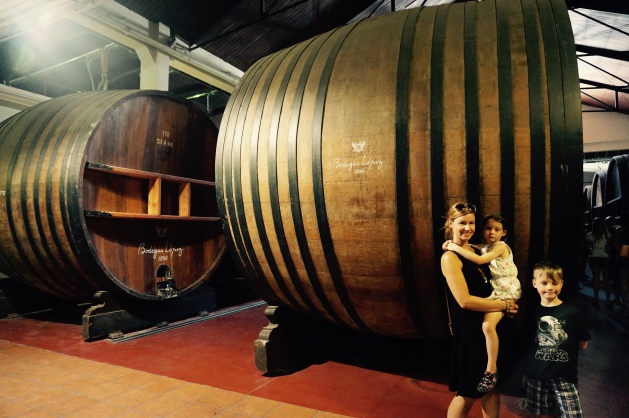 Predictably, only two days later, the two Canadian families and our Swiss friends were parked next to each other once again at the entrance to Aconcagua National Park. We were thankful to have one last night to share some wine and overlanding stories before saying our final goodbyes and heading separately to the Chilean border. We had been warned that this border, which is the main conduit between Argentina and Chile, can be congested during the holiday season. It lived up to this reputation. After four hours of chaotic queuing and spanglish miscommunication with the assortment of border officials we finally obtained all of the permits and stamps we needed to enter Chile, one last time.

Our whole family was happy to return to Chile. The roads are better, the gas is cheaper, the food is more predictable, and there is ample free camping along the thousands of kilometres of beaches. Our first major stop however was not costal but rather inland at the town of Vicuña situated in the beautiful Elqui Valley. This impossibly scenic desert valley is filled with massive cactuses, pisco grape vineyards, and telescope topped mountains. In fact, the geology and atmospheric conditions of this region make it especially adept for astronomy and thus several of the worlds largest telescopes are situated just around Vicuña and there are multiple tourist observatories to provide informative tours and demonstrations.

We visited the Observatorio Mamalluca for a very interesting late-night astronomy lesson. All of us were astounded by our first glimpses through a “real” telescope and Liam was especially captivated. Averie tried her best, but just couldn’t stay awake until the end of the tour.

Ever since our first trip to South America we have had a weakness for the local grape brandy known as Pisco. Specifically the savoury cocktail created by shaking Pisco with lemon juice, sugar, egg white, and ice; the Pisco Sour. We therefore needed to make a stop at a local Pisco distillery for a tour and tasting. We enjoyed a private English tour of the Capel distillery which, we were happy to learn, is a very successful collective of the local family vineyards and now one of the the largest Pisco distilleries in Chile. 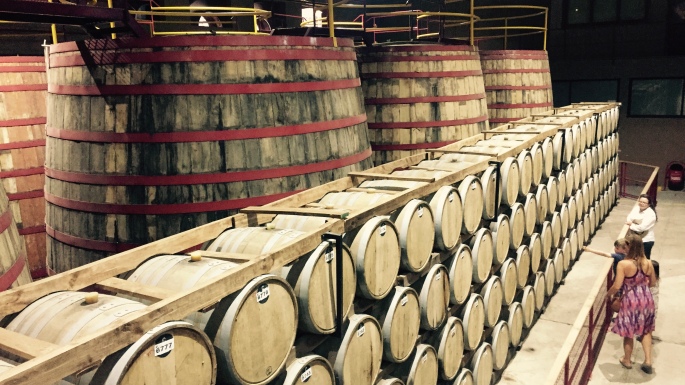 We hurried straight back to the coast and, after restocking on fresh food, we found our way through the desert to the gorgeous boulder strewn beaches of Llanos de Challe National Park. Here we settled in for some serious relaxation. 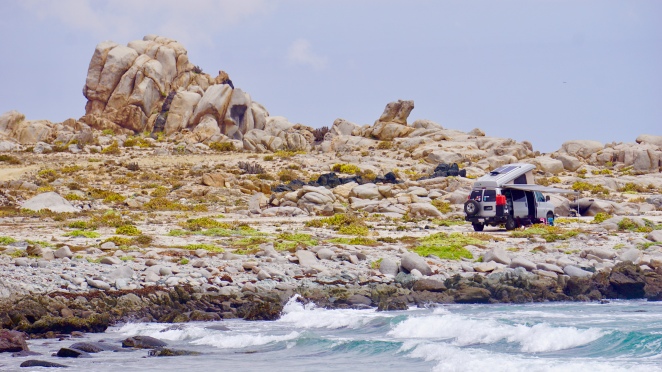 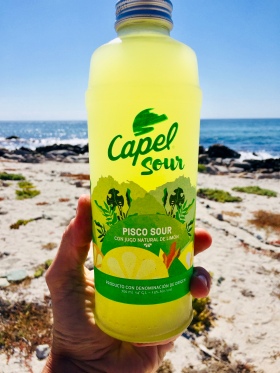 Once we ran out of food (and Pisco Sour mix) we eventually moved up the coast to the powdery white sand beaches of Pan de Azucur National Park. Once again, we set up for an extended stay and enjoyed the sun, sand and surf. The kids were very excited to try out our new body board, and both of them impressed us with their enthusiasm for surfing. While we were more than a little disappointed by the amount of litter we found on such a picturesque beach, a local family redeemed our love for Chileans when they approached us with a gift of fresh fish! Our Spanish was unfortunately not strong enough to have a conversation with them, but we gave their daughter a new soccer ball and our most heartfelt thanks. 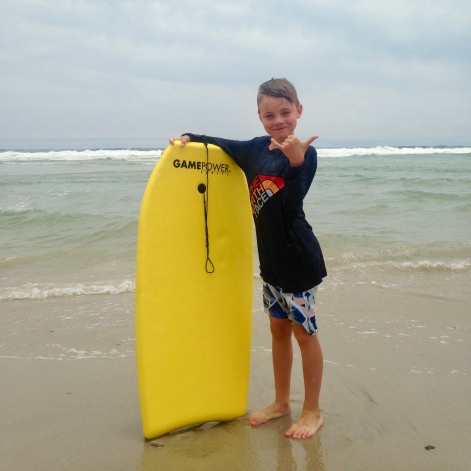 We followed the rugged coastline northward until we reached the city of Antofagasta. Here we stocked up, visited the famous sea arch known as La Portada, and then turned East, directly into the heart of the Atacama dessert. We had experienced deserts previously in Chile and Argentina, but nothing can really compare to the absolute desolation of the Atacama. The majority of this dessert has not seen a drop of rain in over 400 years! There is literally not a single living thing to be seen. Not a shrub, not a cactus, not even some lichen. It looks exactly like the images sent back from the rovers on Mars. 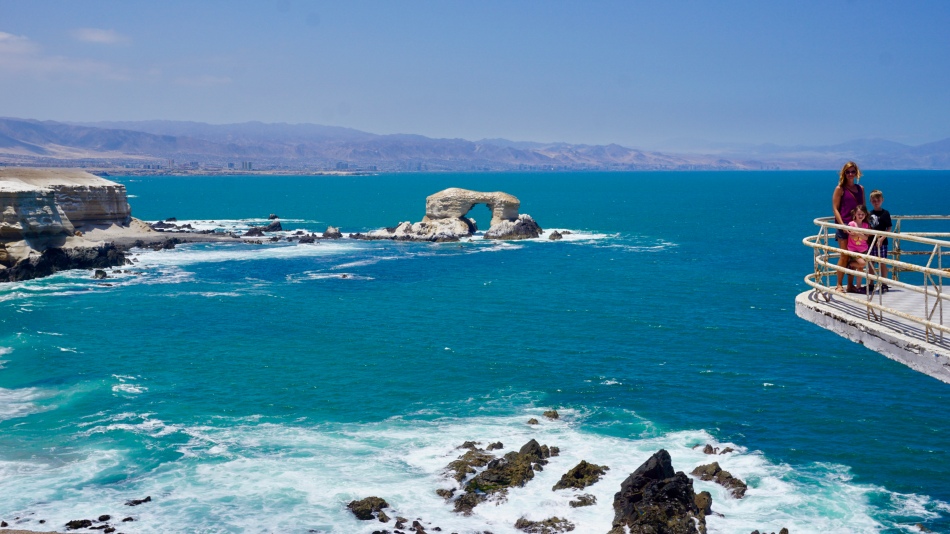 We triple checked our fuel reserves and pushed on, through Bandequero with its creepy abandoned rail station, and past Calama home of the worlds largest copper mine, all the way to the town of San Pedro de Atacama. This cramped little tourist oasis exists improbably amongst some of the most inhospitable terrain on earth. To the south is the great Atacama salt flats, to the East is the Valley de la Luna, to the west are the active volcanos bordering Bolivia and Argentina, and North is one of the most active geyser fields in the world.

The  appropriately named Valle de la Luna (valley of the moon) can only be described as “other worldly”.  The Salt caverns, sand dunes, and haunting rock escarpments are like nothing else we’d experienced. The kids loved exploring the salt caverns, but trudging up the sand dunes in the heat of the day was a little much for them. 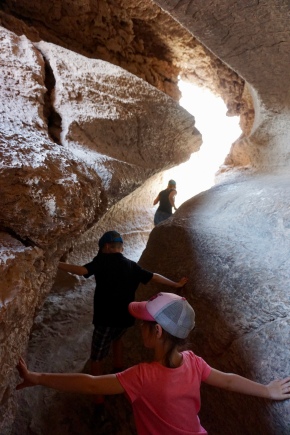 We had encountered some flamingos randomly along our journey at this point, but usually at a distance and always in small numbers. We sought to correct this by visiting the Laguna Chaxa Reserve on the edge of the Atacama Salar. Here we were delighted to find some informative exhibits about the local and migratory flamingos, and of course a huge flock of Chilean Flamingos grazing in the salty lagoon.

We don’t often make mention of the campgrounds we stay at (most of them are not worth mentioning) but the Andes Nomads Campground deserves special recognition, mainly because of the owner Mauricio and his team of friendly nomadic volunteer workers. They made us feel extremely welcome from the moment we arrived and went out of their way to help us several times. We felt privileged to join them for a birthday BBQ for Mauricio’s brother-in-law the night before we departed.

The El Tatio Geysers were our final Chilean experience. This geyser field is one of the most active in the world, and contains over 60 geysers. We arrived in the late morning, just as the majority of the tourist buses were already leaving to return to San Pedro de Atacama. This allowed us to explore the geysers in near solitude and at a leisurely pace. Once we’d seen enough we went for a relaxing dip in the hot springs pool. Surprisingly, this was our first hot springs swim of the entire trip!

A day later we were preparing to cross the Chilean border for the last time and enter Bolivia. We felt a little sad about leaving Chile indefinitely. We’d seen and experienced so much in Chile over the previous months that it had started to become familiar and comfortable. This feeling was probably amplified by our apprehension at entering Bolivia, a country we knew very little about and had heard mixed reviews from other overlanders. However, one thing was certain, we were in for an adventure.

To see more of our overloading adventure through the Atacama check out the links below.